Union Wins Raises to $15/hr for all UNC Workers! 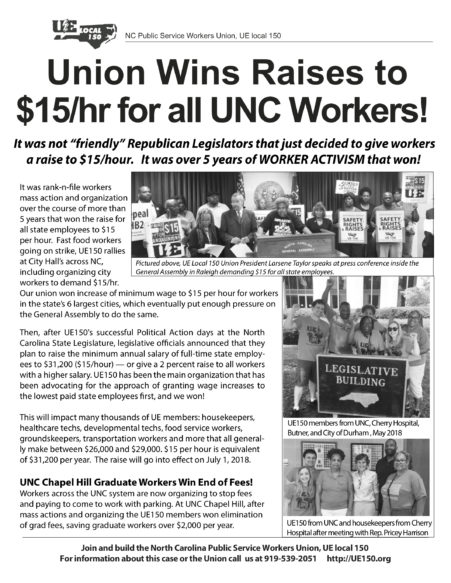 It was not “friendly” Republican Legislators that just decided to give workers a raise to $15/hour. It was over 5 years of WORKER ACTIVISM that won!

It was rank-n-file workers mass action and organization over the course of more than 5 years that won the raise for all state employees to $15 per hour. Fast food workers going on strike, UE150 rallies at City Hall’s across NC, including organizing city workers to demand $15/hr. Our union won increase of minimum wage to $15 per hour for workers in the state’s 6 largest cities, which eventually put enough pressure on the General Assembly to do the same.

Then, after UE150’s successful Political Action days at the North Carolina State Legislature, legislative officials announced that they plan to raise the minimum annual salary of full-time state employ- ees to $31,200 ($15/hour) — or give a 2 percent raise to all workers with a higher salary. UE150 has been the main organization that has been advocating for the approach of granting wage increases to the lowest paid state employees first, and we won!

This will impact many thousands of UE members: housekeepers, healthcare techs, developmental techs, food service workers, groundskeepers, transportation workers and more that all general- ly make between $26,000 and $29,000. $15 per hour is equivalent of $31,200 per year. The raise will go into effect on July 1, 2018.

Workers across the UNC system are now organizing to stop fees and paying to come to work with parking. At UNC Chapel Hill, after mass actions and organizing the UE150 members won elimination of grad fees, saving graduate workers over $2,000 per year.