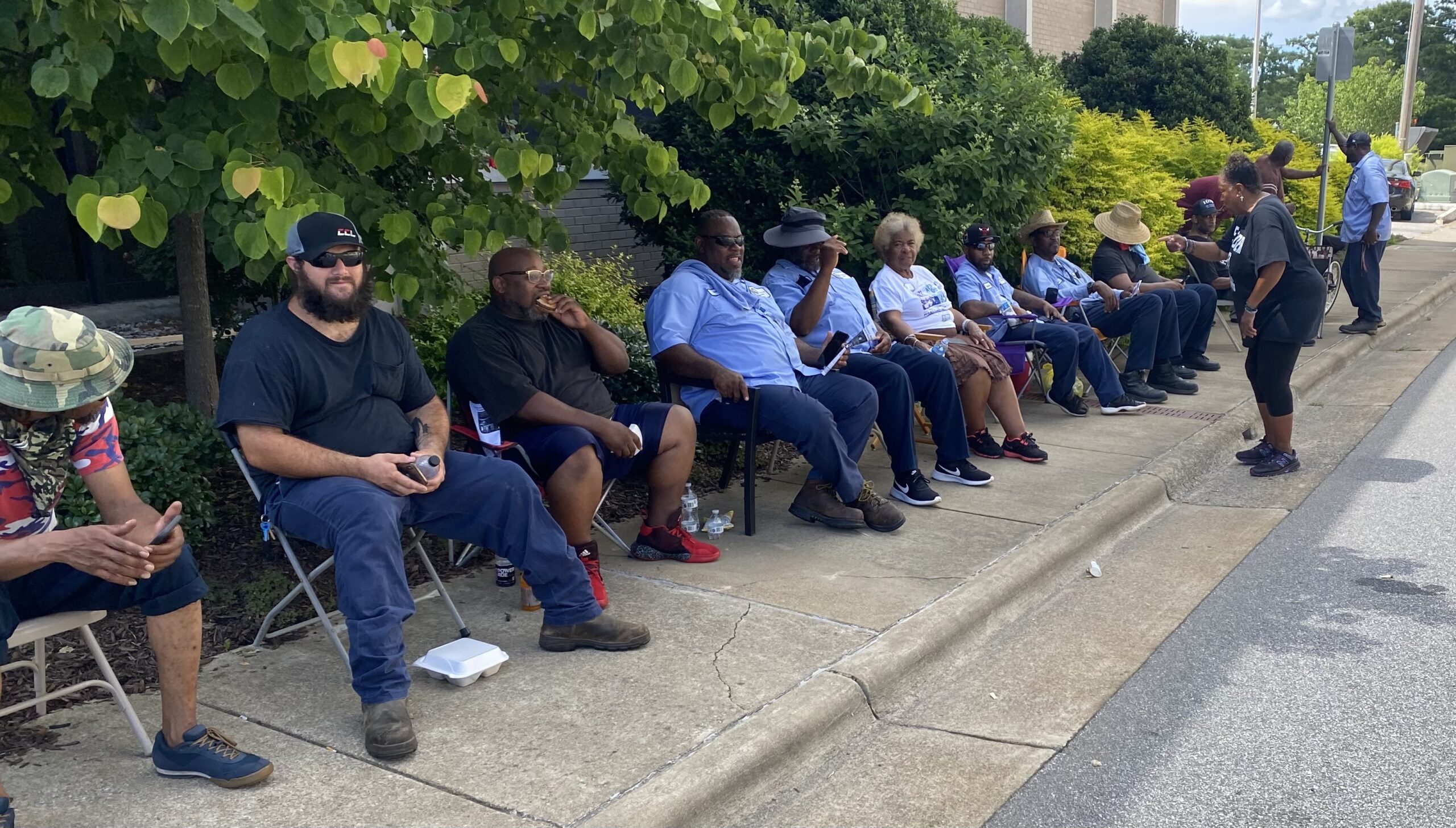 After three years of receiving no raises, and working 16 months through a global pandemic with no recognition or hazard pay, city workers in Elizabeth City staged a two day work stoppage on June 29-30. The Black-majority workers in the city’s Public Works and Water and Sewer departments were upset by the City Council’s vote to turn down their proposed raise this year.

Upon coming to work on Tuesday, June 29, workers self-organized, loading up their work trucks and driving to City Hall, where they surrounded the building, honking their horns and clogging up traffic. They refused to work the entire day. They gave the city a deadline of 7:00pm the next day to get it right. The next day, they all caught the “Blue Flu” at 10:00am and clocked out of work and began a sit- down occupation of the sidewalk surrounding City Hall. Community and family swarmed in to cook hamburgers and hot dogs, bring food and snacks for the struggling workers.

“We are on strike because we are underpaid,” employee Cody Parker told WAVY10. “They don’t want to pay us what we need to be paid.” Workers in the Water and Sewer department start as low as $12 per hour, even with a CDL-A heavy equipment operator license.

Black Lives Matter protesters, who were on the 60 th consecutive day of protesting against the police murder of Andrew Brown, also joined in to show support and unity. Colonial Avenue, on the south side of the municipal building was closed down, due to activists painting “Black Lives Matter” in big bold yellow letters on the street that same day. Andrew Brown was murdered by Pasquotank County sheriffs the day following the George Floyd verdict.

Municipal workers strikes across the South!

This important job action follows on the heels of Black-worker lead municipal strikes in recent months across the South. New Orleans Public Works city workers went on strike just one day prior on June 28, also walking out demanding higher pay. Waste Management workers in Virginia Beach, Virginia just north over the border from Elizabeth City, staged a work stoppage August 19 last year demanding hazard pay from working during COVID-19. Virginia Beach city workers have been organizing the last 8 months to form a union with the United Electrical Workers (UE). State law in Virginia changed effective May 1, allowing city workers the right to collective bargaining for the first time since the right was taken away in the Jim Crow era. (Read more about their campaign at locals.ueunion.org/111)

Elizabeth City council originally voted down the raise by linking it to the local property tax. This helped form an alliance with the property owners in town, who are strongly against raising any taxes. However, due to the workers powerful action, with strong community support, the City Council voted in favor of a 10-cent increase in property taxes to fund a 4% raise for all city workers, and agreed to study the possibility of raising all city workers up to a $15 per hour minimum wage. City workers across the state, that are part of UE Local 150, North Carolina Public Service Workers Union had won $15 per hour minimum wages in 5 cites over 2 years ago, and built strong wage systems on top of that ever since.

Members of the Southern Workers Assembly are supporting worker organizing across the South, including municipal workers by forming Local Workers Assemblies. New assemblies, besides those already being built in Durham, Raleigh and Charlotte, NC are also being built in Tampa, FL, New Orleans, LA, Kentucky and Virginia Beach, VA. These militant worker actions connected to a long-term social movement union strategy are what is necessary to organize labor across the largely non-union South.