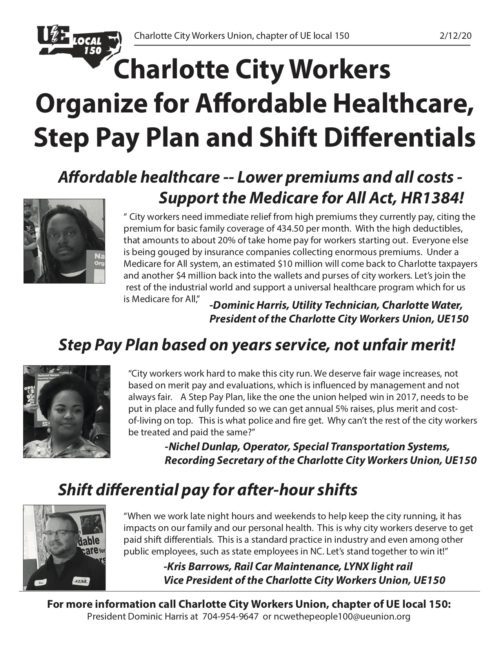 Affordable healthcare — Lower premiums and all costs – Support the Medicare for All Act, HR1384!

“ City workers need immediate relief from high premiums they currently pay, citing the premium for basic family coverage of 434.50 per month. With the high deductibles, that amounts to about 20% of take home pay for workers starting out. Everyone else is being gouged by insurance companies collecting enormous premiums. Under a Medicare for All system, an estimated $10 million will come back to Charlotte taxpayers and another $4 million back into the wallets and purses of city workers. Let’s join the rest of the industrial world and support a universal healthcare program which for us is Medicare for All,”

Step Pay Plan based on years service, not unfair merit!

“City workers work hard to make this city run. We deserve fair wage increases, not based on merit pay and evaluations, which is influenced by management and not always fair. A Step Pay Plan, like the one the union helped win in 2017, needs to be put in place and fully funded so we can get annual 5% raises, plus merit and cost- of-living on top. This is what police and fire get. Why can’t the rest of the city workers be treated and paid the same?”

“When we work late night hours and weekends to help keep the city running, it has impacts on our family and our personal health. This is why city workers deserve to get paid shift differentials. This is a standard practice in industry and even among other public employees, such as state employees in NC. Let’s stand together to win it!”