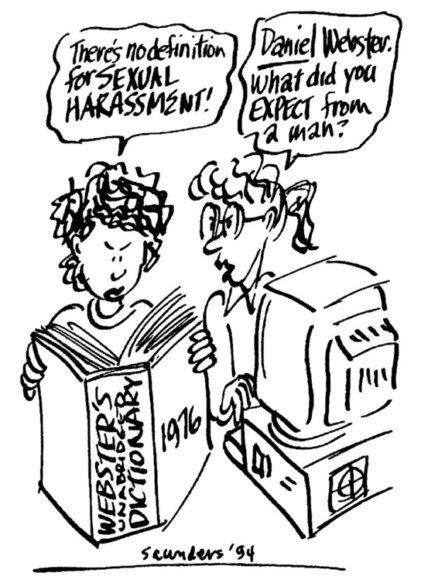 Sexual harassment is a form of sex discrimination that is against the law.  Title VII of the Civil Rights Act of 1964 prohibits discrimination in the workplace based on race, color, religion, national origin or sex.  Title VII is enforced by the Equal Employment Opportunity Commission (EEOC).

The EEOC defines sexual harassment as:

–  unwelcome requests for sexual favors; or

–  unwelcome verbal or physical conduct of a sexual nature.

Caswell Center has recently promoted a worker that perpetrated sexually offensive behavior on several women — this is unacceptable!

Over the last few years, several cases have been reported of unwelcome behavior and comments that were sexually offensive to women workers.  Those workers reported this behavior.  In a 2014 case, in the Parrott building rather than addressing the person responsible for the problem, Caswell Center transferred out the women to another building.

These are not the only instances of sexual harassment at Caswell Center.   As workers, we must remain vigilant, and document every instance and report it back in our monthly union meetings. We must continue to challenge Caswell and expose these incidents so that all workers feel that Caswell is a safe and a welcome place to work.

The election of Trump as President also presents many challenges for our movement for women’s equality, especially when the President himself has cases of sexual harassment against him pending in court.  During the election campaign, many women came forward to publicly expose Trump for his harassment and sexual assault against them.  When the President of the United States shrugs off and denies women’s basic rights, it emboldens sexist men every where to perpetuate further assaults and harassment.  We have to build a united movement at our workplaces and in our communities to challenge this sexist atmosphere.