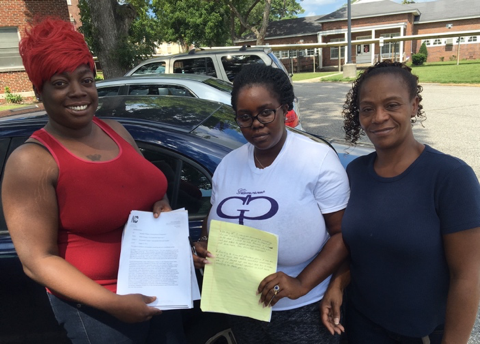 Our union stewards in every corner of the state have been busy these last few months.  There are so many important cases that we have taken up that we don’t have room to publicize.  But here are a few of the more recent cases:

Kim Vann-Burch,  Special Transportation Services, was driving her bus when a

resident side swiped her, causing minor damage to the vehicle.  The management blamed Kim for the incident, even though she did everything by policy.

“I just recently got an unfair one day suspension. After I met with the union they helped me get all my paperwork organized, write everything down and even draw a diagram. After bringing my  papers downtown 3 times and lots of persistance, thanks to the  union support, I did get that overturned and back pay. I encourage all city workers to join the union today! ”  — Kim Van-Burch

Selwyn Pitt, a housekeeper, was dismissed for insubordination.    One Friday afternoon, as workers were preparing to go home for the weekend, Fred, her boss, approached her and told her that she was going to be required to transfer to the floor to work with psychiatric patients, a very dangerous floor.   Housekeepers are not properly trained to work with psychiatric patients and often get in harm’s way without an proper techniques to defend themselves. Selwyn knew this, and had also been informed that other healthcare technicians that were recently injured while working that floor.     Then on Monday morning, Fred approached her again stating she was now assigned to the psychiatric floor.   Selwyn told him that she would not go because she did not feel it was safe.  She left the room and grabbed  her cart to get on the elevator to go onto the floor where she was assigned to work.  She was fired on the spot.   She had a clean work record.  State workers are protected with Just Cause and must have progressive discipline before being fired.  She was not given a disciplinary warning, just fired.  The union, including her steward Barbara Barrons has assisted Selwyn  to file a step 1 and 2 grievance, which the state denied.  The union is now supporting her to appeal the case to the State Office of Administrative Hearings (OAH).

Tankita Peterson, a developmental technician, was given a 5 day suspension on her second occurance being tardy.   This is an extreme escalation of the recent attacks that all DHHS workers face with the new Time and Attendance policy. At Caswell, several workers were given five days suspensions on their second occurance, and threatened with termination on their 3rd.  According to T&A policy, they aren’t fired until 8th occurance.   The union proved that Caswell lied on Tankita’s discipline letter and falsified language that does not appear anywhere in the policy, to justify her write up, yet DHHS Sec. Brajer upheld management’s decision during the 2nd Step Grievance. The union is assisting her to appeal the case to the OAH.