Workers from cities around North Carolina, the state Department of Health and Human Services (DHHS), the University of North Carolina and the Cummins Rocky Mount Engine plant gathered in Raleigh, NC on August 17 and 18 to celebrate Local 150’s 20 years of struggle and to plan strategy for the next two years.

President Nathanette Mayo opened the convention with a State of the Union address in which she outlined Local 150’s many accomplishments. These include winning $15/hour minimum wages for state, municipal and private-sector workers, addressing a wide variety of health and safety issues, winning grievances and getting unjustly fired workers back to work, supporting community struggles, and achieving union rights to payroll deduction and meet and confer. 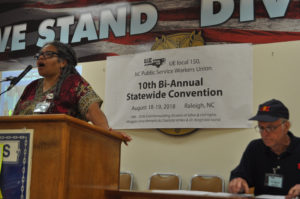 The local has also won the state’s first-ever progressive cost structure for health insurance premiums (those that earn less, pay less) for Charlotte city workers, saving UE members between $800-2,496 per year. City workers in Raleigh, Greensboro and Charlotte have won six weeks of paid family leave for birth, adoption or fostering a new child, and Durham workers won 12 weeks. Meanwhile, state workers fought for and won no increases in costs for health insurance in 2017 and 2018.

“Because we have been out there fighting … we have indeed made our workplaces and our communities better places to live and to work,” Mayo concluded. “We are charged with teaching our members to soar. To educate them, to train them, to keep them actively engaged.”

She asked the delegates to commit to UE150’s vision of social unionism: “Will you commit to making sure another world is possible for our children and those who come behind us?”

The financial report was given by Local Treasurer Jim Wrenn. Local member Angaza Laughinghouse relayed solidarity greetings from the National Union, the Eastern Region, Local 170 (which also represents public workers who are denied collective bargaining), the Committee Against Racism in Greenville, Black Workers for Justice, the Southern Workers Assembly, and Hip Hop for Justice. Leon Johnson, from the Amalgamated Transit Union local representing drivers for Duke University, praised Local 150’s commitment to militant struggle. “We’re in a war. You all are doing a great job. We have to come together.” 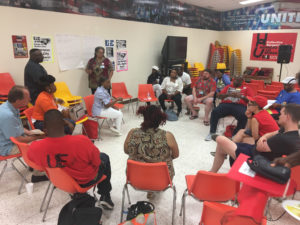 The morning featured a panel on organizing in North Carolina, hearing from leaders in all of Local 150’s divisions. Bryce Carter, a city worker in Greensboro and a leader of UE150’s municipal worker council, told the delegates about the campaign for a Municipal Workers Bill of Rights, kicked off on Martin Luther King, Jr. Day in January. He emphasized the slow but steady progress Local 150’s municipal worker chapters are making towards achieving the goals in the Bill of Rights.

Stephen Pedroza of the Workers Union @ UNC explained how Local 150’s newest chapter has built their union based on UE’s vision of industrial unionism, uniting all workers at the University of North Carolina in one organization. He described the chapter’s involvement in struggles against racism at UNC and related how they learned from other UE locals at UE’s national convention about strategies for reaching out across language barriers.

DHHS leader Peggy Price shared how her chapter has been dealing with an overly complex and hard-to-understand time and attendance policy at Caswell Center, and the struggle to get her fellow workers to overcome their fear. “My heart goes out to all of you that keep your dreams alive, and that keep Martin Luther King’s dream alive,” she said.

Carolyn Beale of CAAMWU spoke about how workers at the Cummins plant in Whitakers, NC had worked together with area pastors and church congregations to win wage increases and dignity for Cummins workers. When she started working at Cummins, the top rate in the plant was $15/hour; just last June, CAAMWU won a $15/hour minimum rate from the company, with the top rate climbing to $22.90. CAAMWU successfully gained the support of 30+ churches in the area around their plant for their demands of $15 per hour and union rights. 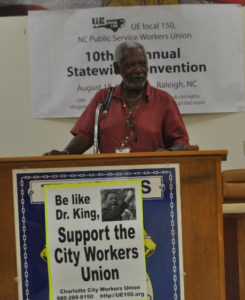 The convention’s keynote speaker was Jerome Scott, a leader of the League of Revolutionary Black Workers, a group of mostly UAW members in Detroit in the 1960s who had pushed their union to be more militant and democratic. Scott emphasized that “Our struggle with the League or Revolutionary Black Workers was to strengthen the union. Our job was to make the union that we pay dues to represent us, and that was the essence of our struggle.” He praised UE for its history and ability to survive attacks, noting that “That strength comes from the fact that [UE] is a rank and file union.”

Scott told delegates that “In the trade union movement, historically it was a movement … that represented the working class as a whole.” But somewhere along the way, most unions decided that they would stop being organizers and representatives of the working class, and would only represent their members. He praised examples from the organizing panel of UE bringing the community and community leaders into workplace struggles as exemplifying the roots of the labor movement.

Working people, Scott suggested, have to study and do political education and learn exactly how the system works, in order to develop consciousness. From that consciousness, we have an opportunity to develop a vision “for the world that we want to build, the world that we want to leave to our children and grandchildren.” And in order to realize that vision, “we have to develop a strategy that is based on uniting our class. If we organize and get ourselves together on a class basis, then we can win. Let’s get it done.”

Durham city worker Sarah Vukelich reported on a recent trip she had taken to South Africa to visit with and learn from the National Union of Metalworkers of South Africa (NUMSA). NUMSA has recently won a landmark constitutional court case requiring that temporary workers who are employed through temp agencies (called “labour brokers” in South Africa) be given permanent jobs after three months. 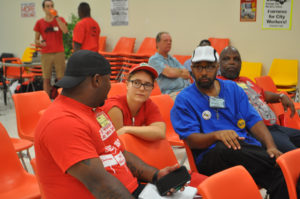 Vukelich recounted how South African trade unions played a central role in the struggle against apartheid, and that they understood that they sought not just to end racist laws but to win “a state run by workers for workers — they were trying to build a totally different economic system.”

DHHS Division Chair and UE Eastern Region Vice President Darrion Smith reported on his recent trip to Korea with US Labor Against the War. He spoke about participating in a massive May Day parade under the banner “All workers have dignity and all workers deserve a decent quality of life,” and particularly noted the Korean labor movement’s work to include lesbian, gay, bisexual, trans and queer (LGBTQ) workers and workers with disabilities. He reported that Korean corporations engage in “primitive union-busting tactics,” like kidnapping workers or workers’ family members. “They have done some horrific things to workers over there. Samsung is one of the biggest corporations they are fighting.” He emphasized that Koreans want independence, reunification and autonomy, to be able to pursue a peaceful future for the Korean peninsula without interference from the U.S. He reported the efforts to reunify the Koreas into one country are largely hindered by 30,000 U.S. troops on the border, who have been there since 1953.

Keynote speaker Jerome Scott also spoke on the global labor movement panel, addressing the world-wide resurgence of far-right parties and organizations. “This right-wing upsurge is a response to the same thing in the world as it is here, and that is this unstable capitalist system that is causing everyone to be fearful for their future.”

Not Shying Away from Controversy

On Sunday morning, the delegates heard an address from UE General President Peter Knowlton. He praised Local 150’s work in winning progressive health insurance and paid family leave policies from municipalities, and in developing a Municipal Workers’ Bill of Rights that could easily be a model bill of rights for all workers across the country. “It’s a really excellent document,” Knowlton said.

Turning to the realm of political action, Knowlton said “We have to do everything we can to throw out reactionaries” in the 2018 elections. He pointed to the recent primary victories of the unabashedly pro-worker candidates Alexandria Ocasio Cortez, Summer Lee and Sara Innamorato against incumbent establishment Democrats as evidence that “people are beginning to understand that the basic UE principles that we put forward” show the way to a better future for working people.

He spoke about UE’s history of fighting for justice. “We may be small but we punch way above our weight and we have a powerful voice.” Unlike other unions, he said, UE doesn’t shy away from controversy when it is necessary to do what is right for working people.

UE Local 150 members took that to heart as they discussed resolutions on various matters. They endorsed the national prison strike which is being held from August 21-September 9 to demand improvements in the conditions of prisoners. “All workers, including those who are incarcerated, should have a say in their working conditions.” Donald Quick, of the Durham City Workers chapter, testified from his own experience that the prison system doesn’t rehabilitate people, it’s just a big business that profits off of incarcerated people. “I got out and made a better life for myself. It wasn’t the prison system that rehabilitated me.” Topaz Kone of the Greensboro City Workers chapter spoke about her experience working in jails and prisons through prison ministry and education programs for the last ten years. People who have served their time “can’t get jobs or live where they want to live” because of discrimination against the formerly incarcerated.

Another resolution declared solidarity with Local 150 and University of North Carolina graduate worker Maya Little, who is being threatened with expulsion and the loss of her job for an act of civil disobedience protesting “Silent Sam,” a confederate statute on UNC’s campus.

UE Local 150 delegates also met in division councils to compare notes across their divisions and prioritize work for the coming year, and participated in workshops on “Member Orientations,” “Recruiting New Members and Building Your Chapter,” “How to Run a Member-Led Campaign,” “Steward and Officer Training,” and “Ending Sexual Harassment and Gender Discrimination in the Workplace and our Union.” 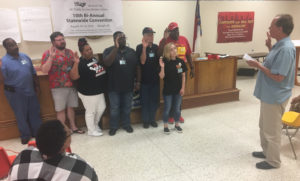