Charlotte City Workers Organize and Win! Victories of the Union in last 2 years 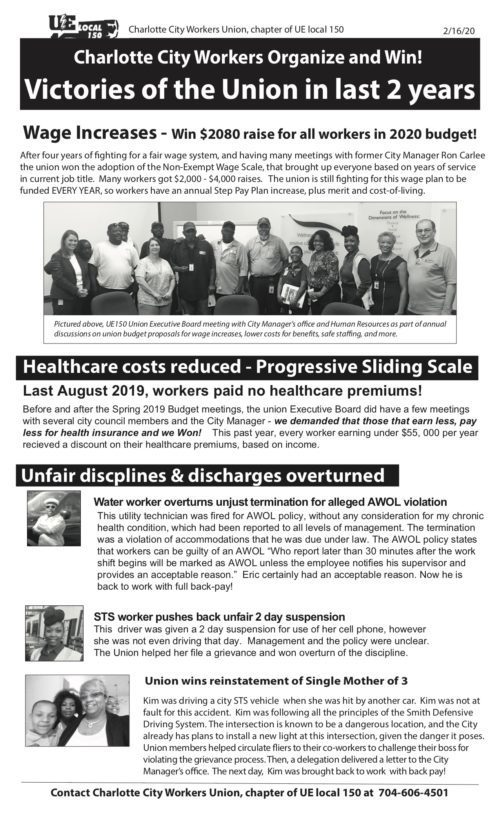 After four years of fighting for a fair wage system, and having many meetings with former City Manager Ron Carlee the union won the adoption of the Non-Exempt Wage Scale, that brought up everyone based on years of service in current job title. Many workers got $2,000 – $4,000 raises. The union is still fighting for this wage plan to be funded EVERY YEAR, so workers have an annual Step Pay Plan increase, plus merit and cost-of-living.

Before and after the Spring 2019 Budget meetings, the union Executive Board did have a few meetings with several city council members and the City Manager – we demanded that those that earn less, pay less for health insurance and we Won! This past year, every worker earning under $55, 000 per year recieved a discount on their healthcare premiums, based on income.

This utility technician was fired for AWOL policy, without any consideration for my chronic health condition, which had been reported to all levels of management. The termination was a violation of accommodations that he was due under law. The AWOL policy states that workers can be guilty of an AWOL “Who report later than 30 minutes after the work shift begins will be marked as AWOL unless the employee notifies his supervisor and provides an acceptable reason.” Eric certainly had an acceptable reason. Now he is back to work with full back-pay!

This driver was given a 2 day suspension for use of her cell phone, however she was not even driving that day. Management and the policy were unclear. The Union helped her file a grievance and won overturn of the discipline.

Kim was driving a city STS vehicle when she was hit by another car. Kim was not at fault for this accident. Kim was following all the principles of the Smith Defensive Driving System. The intersection is known to be a dangerous location, and the City already has plans to install a new light at this intersection, given the danger it poses. Union members helped circulate fliers to their co-workers to challenge their boss for violating the grievance process. Then, a delegation delivered a letter to the City Manager’s office. The next day, Kim was brought back to work with back pay!