Is Durham a union town? Labor groups hope so 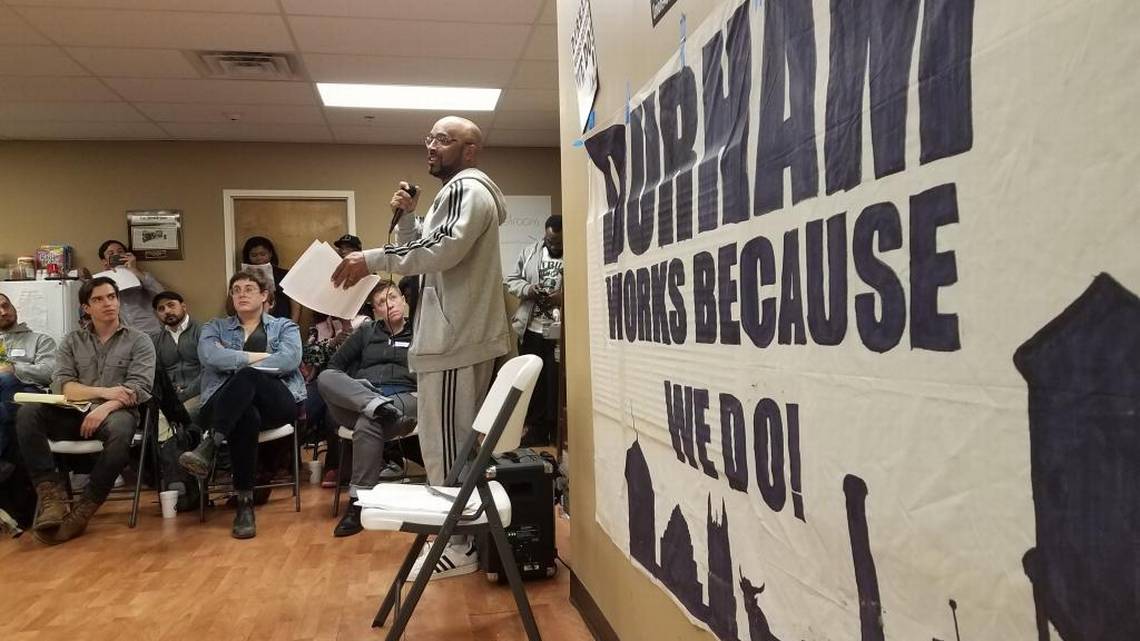 Union and labor groups in Durham are calling for a Worker’s Rights Commission, and think they have a city council who supports it.

“Durham probably has the most progressive city council in North Carolina,” said Aiden Graham, campaign manager for the North Carolina State AFL-CIO. He thinks the city can be a leader in the state and the South. But he also said Durham has a low union density.

North Carolina law prohibits collective bargaining for public employees. However at Duke University, which is private, adjunct faculty were successful in forming a union and negotiating a contract in 2017.

On Thursday night, the second Durham Workers Assembly was held to gather different labor groups together to call for the Worker’s Rights Commission. Along with the AFL-CIO, UE Local 150 and SEIU Duke Faculty Union, the Domestic Workers Alliance-We Dream In Black, Raise Up for $15 and Justice for Rebar and Reinforcement Industry Coalition are calling for a local rights commission. 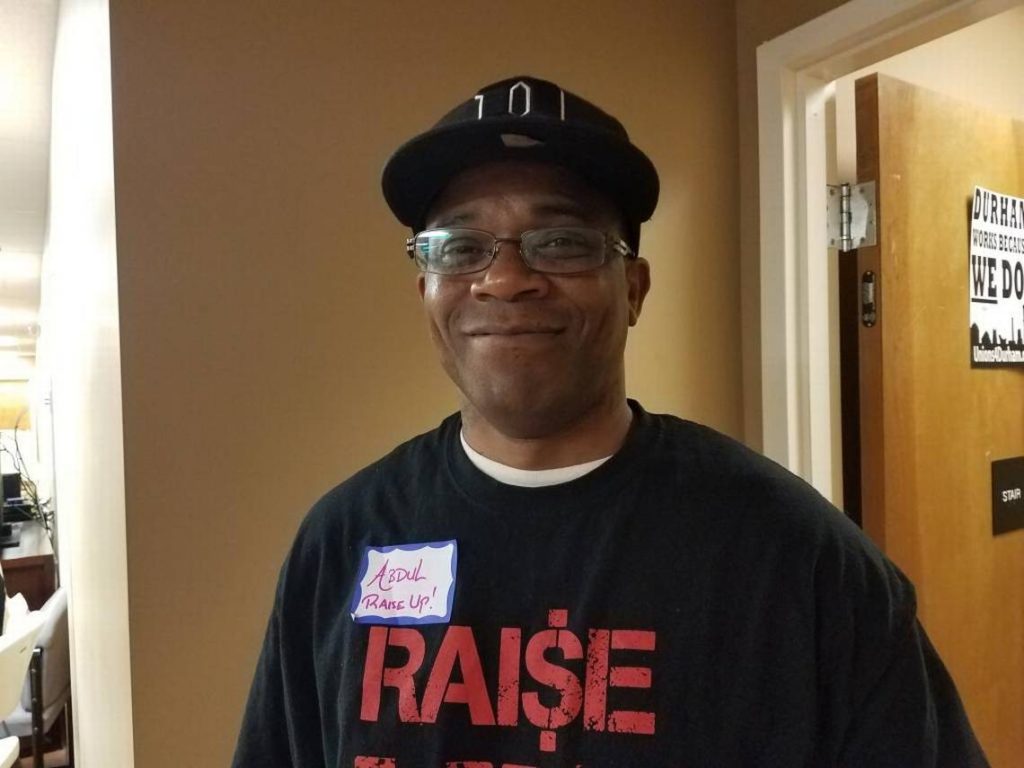 Abdul Burnette of Raise Up for $15, who has worked in the food service industry for more than 20 years.

Strobino said a Worker’s Rights Commission would be mostly run by workers but also have the city council hear complaints, though the state law limits their involvement. The commission would also do a study of worker’s rights in Durham.

MJ Sharp of the Duke adjunct faculty union said that a commission would show the way for other towns across the state and nation.

Eric Winston was born and raised in Durham. He’s part of Raise Up for $15, the nationwide group of workers, many in fast food, who want a minimum wage of $15 per hour.

“We need to come together and unite on a mass level,” Wynn said.

Abdul Burnette of Raise Up for $15 has worked in the food service industry for more than 20 years, at KFC, Bojangles’ and Papa John’s. He said Raise Up has made progress across the country because “we keep putting the heat on the fast food restaurants.” 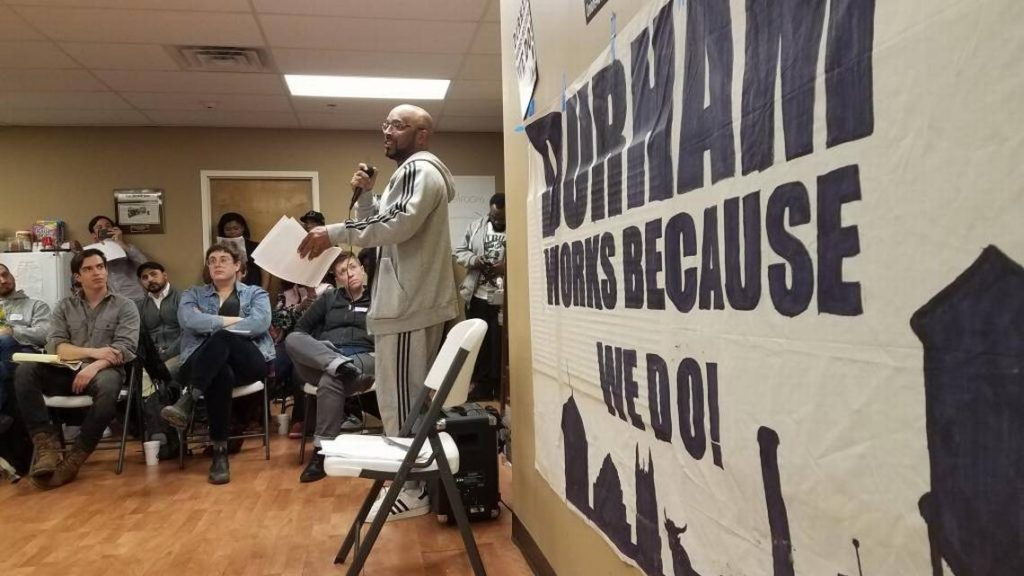 Romey Gaddy, a member of the Durham City Workers Union, which is a chapter of UE Local 150, works in the city’s water management department.

Raise Up for $15 will march in the MLK Black History Month Parade on Saturday on Fayetteville Street in Durham. Burnette said the group has 1,000 workers in Durham and recruits every day.

This week, leaders in the Durham City Workers Union from the solid waste, water management and public works departments sent the council their proposals for the next budget. They want a flat, across the board raise of $2,500 instead of percentage raises and quarterly meetings with the city manager, department heads and employee organization representatives, among other things.

Romey Gaddy, a union member who works in water management, spoke to the workers assembly crowd.

“We gotta fight … You got guys who speak up, but don’t speak out,” Gaddy said. 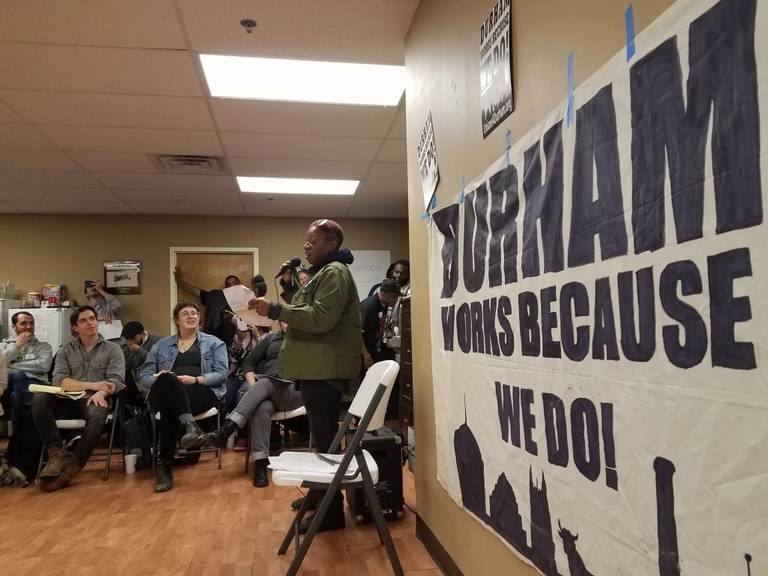 Lurika Wynn from the Domestic Wokers Alliance-We Dream In Black chapter, talked about working in home health care during a Durham Worker’s Assembly on Thursday, Feb. 1 in Durham.