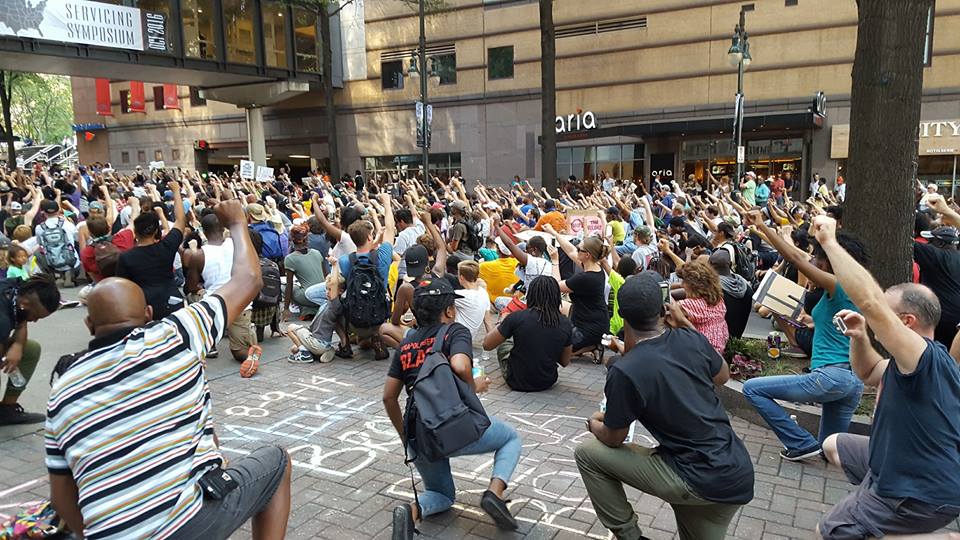 No school, no shopping, no work – We want justice now! Black Lives Matter!

There is” A WAR ON ALL WORKERS” and particularly an on going “WAR ON BLACK AMERICA” !

The police killing of Keith Lamont Scott makes the sixth in Charlotte, NC and with Terence Crutcher, makes the 163rd killing of a Black person in the U.S. in 2016 by law enforcement.

This is not a problem of just a few bad cops, Black-Latino community relations, inadequate training by police, etc. Its the continued systematic racist repression, oppression and exploitation of Black and Brown working people in our communities, workplaces, public schools and government institutions.

As workers, we must all take a closer look at the connection between workplace and police murders/repression. The growing racism with nooses being hung at UPS , private & public service work sites…the lower pay…the lack of worker rights….lack of union and collective bargaining rights and how the big bosses use fear, retaliation and workplace repression. This is a systematic effort by the ruling 1 % and wealthy class in power to keep us in our place. They want us powerless, poor wage slaves and oppressed down.

We must see there is pain, anguish and righteous outrage as yet another Black person is murdered every day! And working class youth are clear on what we experience every day – workplace/community exploitation, oppression and police occupation of our community. As Black and Brown workers struggle for so called transparency, community police review boards, community subpoena power for calm, sensitivity training and body cameras for the police. We as workers struggle and call for workers’ rights as human rights, a living minimum wage of $15/hour, right to organize unions, collective bargaining rights, etc. The elite wealthy 1% in power deny us our fundamental human rights demands.

We want workplace and community democracy for working people! We want power to build better communities for working, Black and oppressed people. We deserve a better society and a better world. Police departments and all community institutions must be accountable to the communities they serve. This can only happen if Black and working people have real power in our community, workplaces and schools.

We stand in solidarity with our Charlotte working class brothers and sisters and all communities resisting police repression.

We call upon all workers to join the union, which is an important organization of workers to push back against the city. We call upon others unions, community organizations and activists to work to end police murders and repression to unite and support the call to study the Freedom Manifesto/ An Assembly for Black Liberation, the Southern Workers Assembly or the various People’s Assemblies. All these efforts must discuss, educate and convene forums for Black, oppressed and working people to craft an agenda/ plank and programs to” END the War On Black America”….”Stop the War On Workers”! We are joining others in the call to consider “how to move and engage even more unions, workers and Black /Brown and oppressed people by stepping up our resistance with a One Day Mass Economic Action —A BLACK SOLIDARITY DAY lead by Black working class organizations …. no school, no shopping, no work — to demonstrate to the powers that be that we want real change NOW!