Statement by the Executive Board of the North Carolina Public Service Workers Union, UE Local 150

RALEIGH – Directly after the holiday season, hundreds of state nurses, doctors and other licensed healthcare workers in the Department of Health and Human Services are receiving notice that they are now exempt from the State Human Resources Act. All “licensed” staff in DHHS will lose “just cause” protections allowing the state to fire them with much greater ease. State Legislators buried this move on page 230 of the State Budget, Senate Bill 105, Appropriations Act of 2021, which was approved in November.

“Licensed healthcare workers that put their lives on the line working on the frontlines during the pandemic could have left DHHS to get better pay and treatment,” stated Sekia Royall, a DHHS employee serving as President of the NC Public Service Workers Union, UE Local 150. Royall continued, “They came to work everyday even despite the severe understaffing. Now they are ‘rewarded’ by taking away their job security. This is part of a larger anti-worker trend in the General Assembly that we find very troubling.”

On top of tens of billions of dollars of tax giveaways to corporations (who will have their taxes completely eliminated in the next few years) and failing to grant family-supporting wage increases or to expand Medicaid, the State Budget for Fiscal Years 2021-2022 has this hidden provision that will cause great stress for our state’s valuable nursing staff. Attacks on public workers job security have long been a mission of the corporate elite in the General Assembly. In recent years other state employees have been stripped of these rights. Just cause is the ‘gold standard’ for job security requiring an entire set of criteria before workers can be terminated, including the “7 tests” which are prior notice, progressive discipline, equal treatment, reasonable work rules, prior and complete investigations, sufficient proof and appropriate discipline. (Learn more about the 7 Tests of Just Cause on the UE website).

In a report released in late November, UE150 revealed hundreds of vacant direct care positions at DHHS State OperatedHealthcare Facilities, including several units being completely closed down due to lack of staff. This new policy will undoubtedly make understaffing worse.

DHHS workers are already up against management’s retaliatory actions. This move will impair patient safety because workers will hesitate to speak up for patients and themselves out of fear of being fired. Front line workers have the answers to the causes of their colleagues leaving and why there are worsening and unsafe vacancy rates at our DHHS facilities. Efforts should be made to hear these diverse voices, not silence them. Making it easier to terminate professionals without cause will only accelerate the exodus. Instead of targeting frontline nurses and doctors and implying that making it easier to fire workers will achieve the goals of the mission statement, the focus should be on the incompetent and corrupt management personnel who are causing the instances of bad patient care, unsafe hospital conditions, and inefficient use of state funds.

We call on the State Legislature to rethink this drastic move and restore SHRA protections for all DHHS employees, and provide further resources for safe staffing. This is critical for workers to provide quality services to our society’s most vulnerable residents struggling with behavioral and physical health conditions. 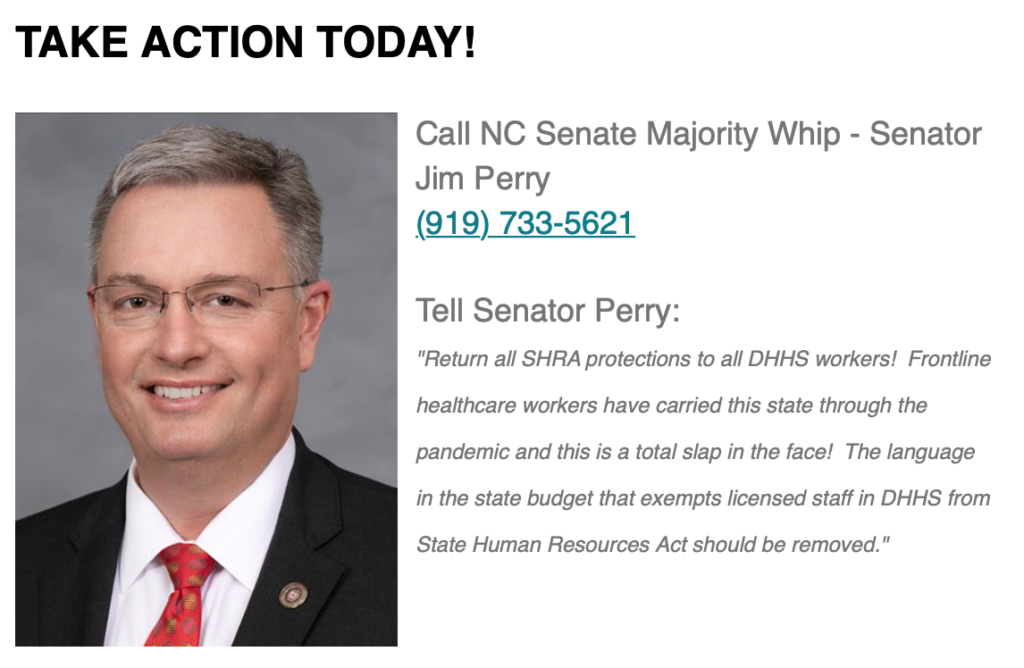