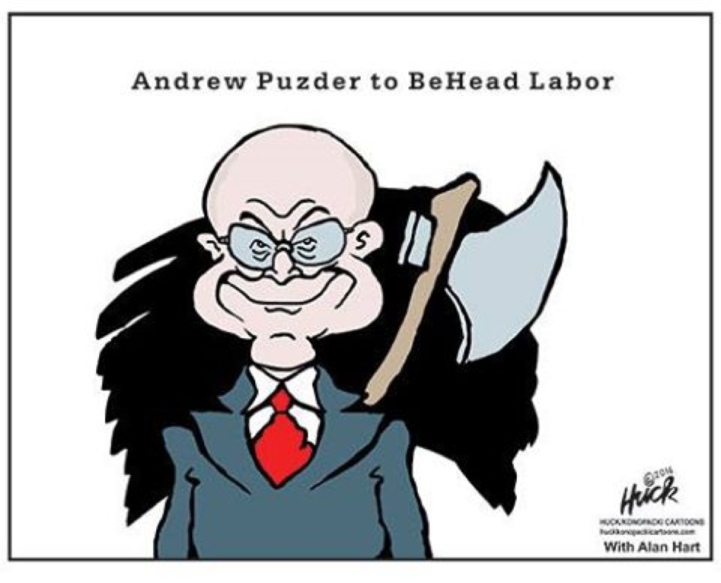 Labor leaders said after the election they’d give him a chance to deliver on his pro-worker agenda. But the ceasefire appears over. The president-elect seems to be assembling a pro-business, racist    Cabinet that could clash with unions at every turn, and undermine the purpose of the departments they are appointed to lead.

Trump appointed Andy Puzder, the CEO of fast food chain CKE Restaurants, the parent company for Hardee’s, as Secretary of the DoL. Puzder spent $29 million from 2004 to 2014 settling several employee lawsuits alleging wage theft. He advocates rolling back the minimum wage and using automation to eliminate jobs. DoL which is supposed to protect workers, now has one of workers’ biggest enemies in charge!

Chief Strategist for the President

Trump appointed Stephen K. Bannon, a white nationalist media mogul, to a top White House position.  Under Bannon’s guidance, Breitbart News served as a hub for racist, anti-immigration and especially anti-Muslim lies and distortions. Shortly after a white supremacist, Dylann Roof, shot and killed nine people at a Charleston, SC church, the site declared that “the confederate flag proclaims a glorious heritage.” Bannon also made headlines in August after an ex-wife accused him making anti-Semitic comments, and after court records revealed he’s been charged with domestic violence against her.

Trump plans to tap Betsy DeVos, a billionaire businesswoman for secretary of Education. She supports expanding charter and other private school options.  DeVos wants tax payers to subsidize private religious schools.  She has helped to force through changes to the law that gut the rights of workers. DeVos stated wants a “return on our investment.”

Representative Virginia Foxx, a Republican from North Carolina who will become chair of the U.S. House of Representatives Committee on Education and the Workforce in January. Foxx wants to completely obliterate unions, stating they “sort of lost its reason for being”.  She said one of her top priorities will be to roll back a slew of Obama administration labor initiatives including a recent rule that would extend mandatory overtime pay to more than 4 million workers.

Department of Health and Human Services

Tom Price, the Georgia congressman who has fought to repeal the Affordable Care Act.

Trump is highly considering nominating Senator Jeff Sessions for either AG or DHS Secretary. In years past,  the Republican-controlled Senate rejected his nomination by President Reagan to a federal judgeship. Several US attorneys testified that he had made racist

comments, and that he had been hostile to civil rights

cases. Mr. Sessions denied making most of the remarks, but apologized for once saying that he had thought the Ku Klux Klan was O.K.

Ben Carson, who has no experience with housing, will bring his conservative anti-welfare ideology to his position as secretary of HUD.